The Amzdeal Solar Powered PIR Motion Sensor Light, 32 Led SMD Solar Powered Security Light was kindly provided to me by SuperStore2014 free of charge in exchange for a fair and unbiased review on Amazon. No additional compensation was given in exchange for posting this article on my blog.

To enlarge an image and view its description, please click on the image.

Usually these types of light have a protective film over the plastic diffuser covering the LED’s that should be removed before use, this one sadly does not, but there is one on the solar panel and the light itself is supplied in a thinly padded plastic bag.

Measurements taken with a digital calliper and an engineers rule, they are accurate to within 0.1%.

The motion sensor and light panel are mounted at an angle of 55 or 125 degrees depending on your perspective.

The switch for the solar light is located within the battery compartment. Sadly, this means should you wish to change the light setting you will need to remove the light from where it is mounted and remove two screws securing the battery cover to access the switch. 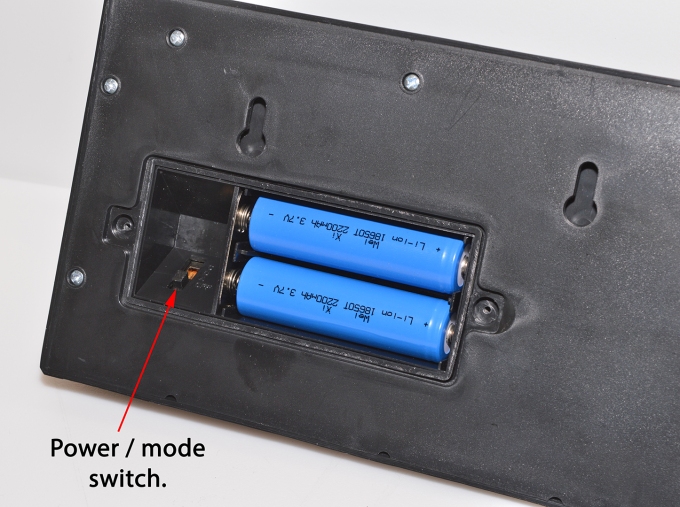 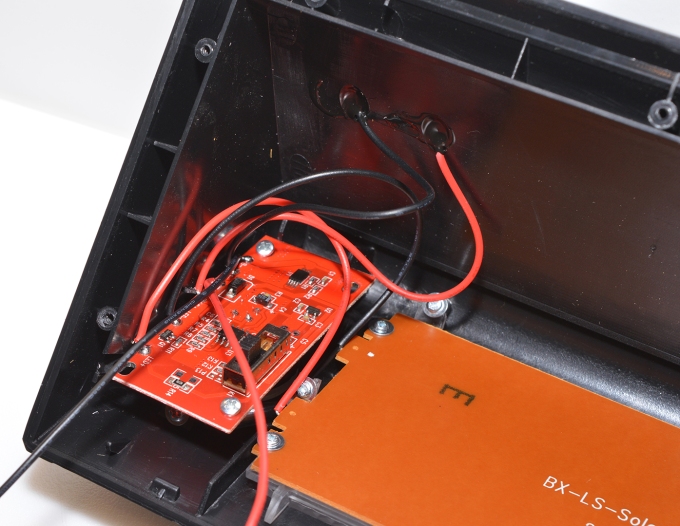 There are a total of four available functions for the light.

Thanks to the location of the power switch on the light it is tamperproof, however, thanks to the means of mounting there is nothing stopping anyone just lifting off the wall and walking off with it.

On the back there are two recessed hook style screw mounts, simply stick two screws in the wall (using the handy template supplied) align the recesses on the rear of the light and it simply slots onto the screws. In strong winds the bottom edge of the light can flap about a bit if it is in an exposed location, to avoid this (and to make any would be intruders think the light is more securely affixed than it actually is) I would recommend using some reusable double sided no nails sticky tape, just make sure its the reusable tape and not the permanent one.

If you want to install this light in a front garden or other location where it might be susceptible theft, I would mount the light up high rather than using any permanent fixing and to be honest due to the design of the light it kind of needs mounting at least 2 meters high anyway due to the angle of the light and sensor…

The screws supplied are basic screws and if you are able I would advise using green organic coated rust proof screws if you have some to hand.

LET THERE BE LIGHT.

For fair comparison when testing these types of light I always mount them on my shed at the bottom of our garden. With this particular light this test would not prove a fair comparison being as the angle of the sensor and light are mounted at a far steeper angle than traditional wedge style solar garden lights. As such, if the light were located at a height of 1.4 meters its detection range and the spread of light would be about 1 meter at best.

If you are using this to light up an area, it needs placed at a height of about 2 meters to 2.5 meters high, say about halfway between ground floor and 1st floor windows. Given the design it also makes an excellent light to place just above external doorways if you are just after localised light and not trying to light up your entire garden. (Just above a shed or porch doorway is an excellent use for the light). 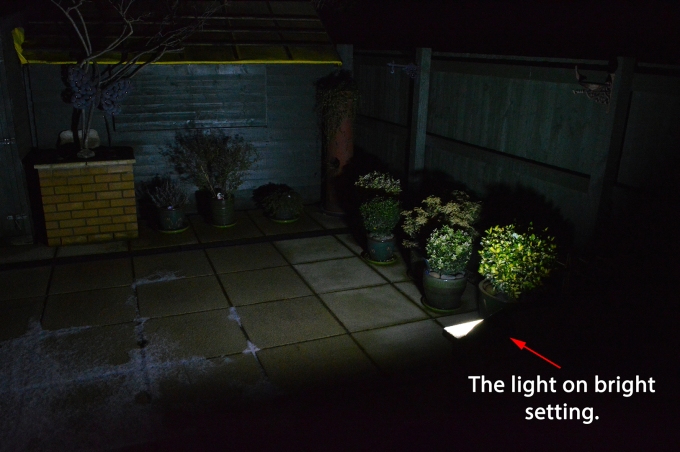 Due to the rather large and raised sensor I had high hopes for its detection capabilities, sadly in reality the angle of detection is only about 45 to 50 degrees in any direction, noticeably less than the average solar wedge light with a much smaller sensor.

Calculating the maximum detection range is fairly pointless with this particular unit again due to the angle the sensor is installed at and the results entirely depend on the installed height. At a height of approximately 2 meters expect a detection range of about 2.5 meters and as noted before at about 1.4 meters expect a range of at most 1 meter.

Quite frankly the waterproofing features on some of these cheap solar security lights is at best unfit for purpose. Few have a proper silicone or rubber seal and most have holes leading right into the internal PCB and battery compartments, which is my main grievance with these types of light and the first thing I check when reviewing them.

The Amzdeal Solar Powered PIR Motion Sensor Light thankfully is different, but that doesn’t mean that there isn’t room for improvement.

The light is constructed from 3 pieces of black plastic with a high gloss finish, which sadly this isn’t very durable or high quality and is susceptible to marking easily. The first section is the front wedge shaped frame containing the PCB, lights and solar panel. The second section is a removable access panel that secures onto the back of the wedge section which is fitted with a U shaped recessed rubber seal (Note:- U shaped and not a full seal all the way around, there is no seal on the bottom edge). 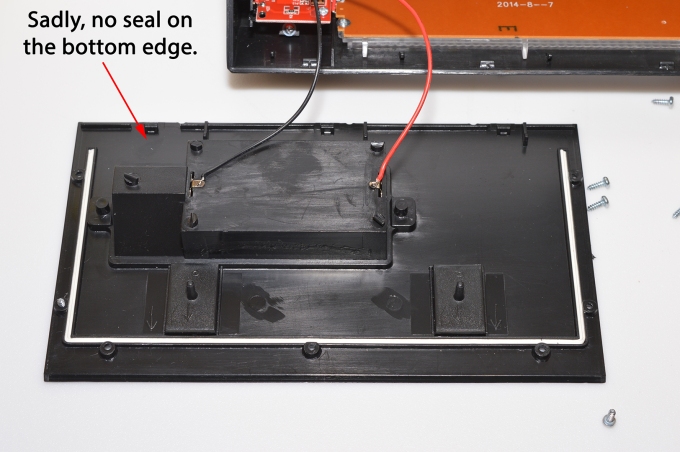 Located on the inside of the rear removable panel is the battery compartment which is encased in plastic on the inside (with the exception of two small holes for wires connecting to the battery terminals) and on the outside is covered with a smaller removable access panel secured with two screws which is fitted with a 360 degree rubber seal. 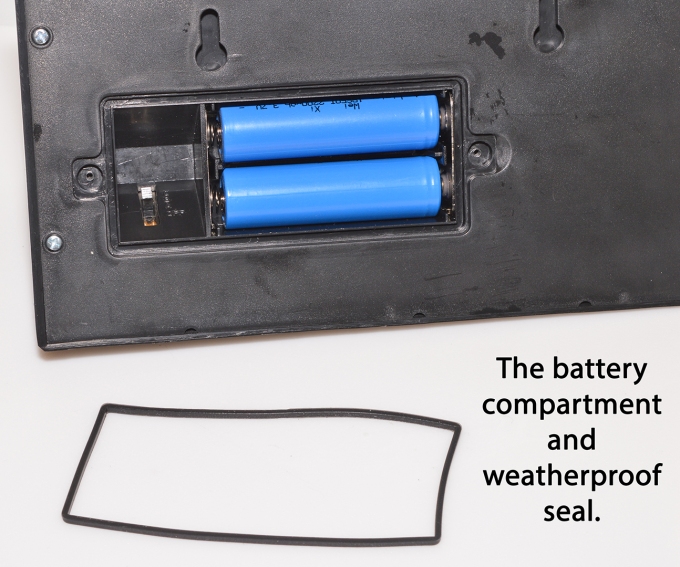 When my light was received this panel was very lumpy and there were notable gaps in the panel that would have easily allowed moisture in, somewhat defeating the object of having a seal. The reason for this was the gasket was improperly installed, as such when you receive your light (or indeed any outdoor light) check that any seals are present and installed correctly and reseat correctly if they are not.

As well as wishing the main access panel had a 360 degree seal, perhaps 4 screws to retain the battery compartment would provide a better seal. As with only two screws, providing pressure to form a seal with the rubber surround I’m not entirely convinced it’s as effective as it could be.

Basically, it’s protected from rain and a garden hose with a shower head setting for “at least” 3 minutes…. apparently.

As noted earlier, another of the key flaws with such lights that have recessed mounts on the rear is that the mounts are not sealed, leaving a multiple holes in the back panel leading into the internal components, thankfully on this light they are sealed off. The battery compartment is reasonably well protected, but the main compartment really isn’t protected that well from water on the bottom edge.

On a final note for this section the manual sadly fails to note anything about operational temperatures, which is disappointing. To ensure maximum operational life from your device during freezing temperatures you should remove the batteries and bring it indoors until the weather warms up. I will confess that I have left such devices outside in mild winters, but I have also lost more than a few leaving them out in prolonged sub zero temperatures as well.

The light is fitted with two unbranded 18650T 2200mAH 3.7v removable (and obviously rechargeable) batteries. Trying to calculate the battery life would take some fairly extreme methods of testing that I am not inclined to do as there are far too many variables, more so that I would even consider to try and list.

A similar light to this that I own that has a single 2200mAh battery, 16 LED’s and a solar panel about a third the size of this one lasts all evening on dim in summer, as such so should this. I can say that on the 8th March 2017 with the light set to dim constant and high brightness when motion is detected with a near constant flow of neighbourhood cats lurking the light lasted till just past midnight.

Thank you for taking the time to read this review, I hope it has been helpful to you. If you have any questions or comments regarding this review, please post a comment below and I will do my best to answer them.

Copyright © 2014-2017 EunoiaReviews. All rights reserved. Reproduction of any part of this site including images and video files is strictly forbidden without prior written consent.